The biggest day in the fish and chip calendar – National Fish and Chip Day 2022, returned for the seventh year on Friday 27th May and what a day it was!!

The event has gone from strength to strength since its launch in 2015 and despite the restrictions, nearly 50 million people would have seen, heard or read about the awareness day last year.  National TV, radio and newspapers featured stories as did the regional media.  Social media was awash with fish and chip stories with our hashtag #nationalfishandchipday and we were number 1 on Twitter from 8 a.m. and stayed there all day long!

We want to celebrate this amazing industry who are at the centre of every community and who have, when able to do so safely, kept us fed, and when that wasn’t possible kept us all safe by remaining closed at great sacrifice to their business.

Thank you to this amazing industry that made National Fish and Chip Day 2022 the best yet as NEODA brought together everyone involved in creating this iconic British dish; from Fish & Chip shops, pub chains, restaurants, retailers, to the fishermen and farmers who provide the sustainable and natural ingredients needed to create this family favourite.  In the meantime, stay safe.  KEEP AN EYE OUT FOR THE 2023 DATE!

Don’t miss your chance to get involved and build support – start tweeting with the hashtag #nationalfishandchipday now! 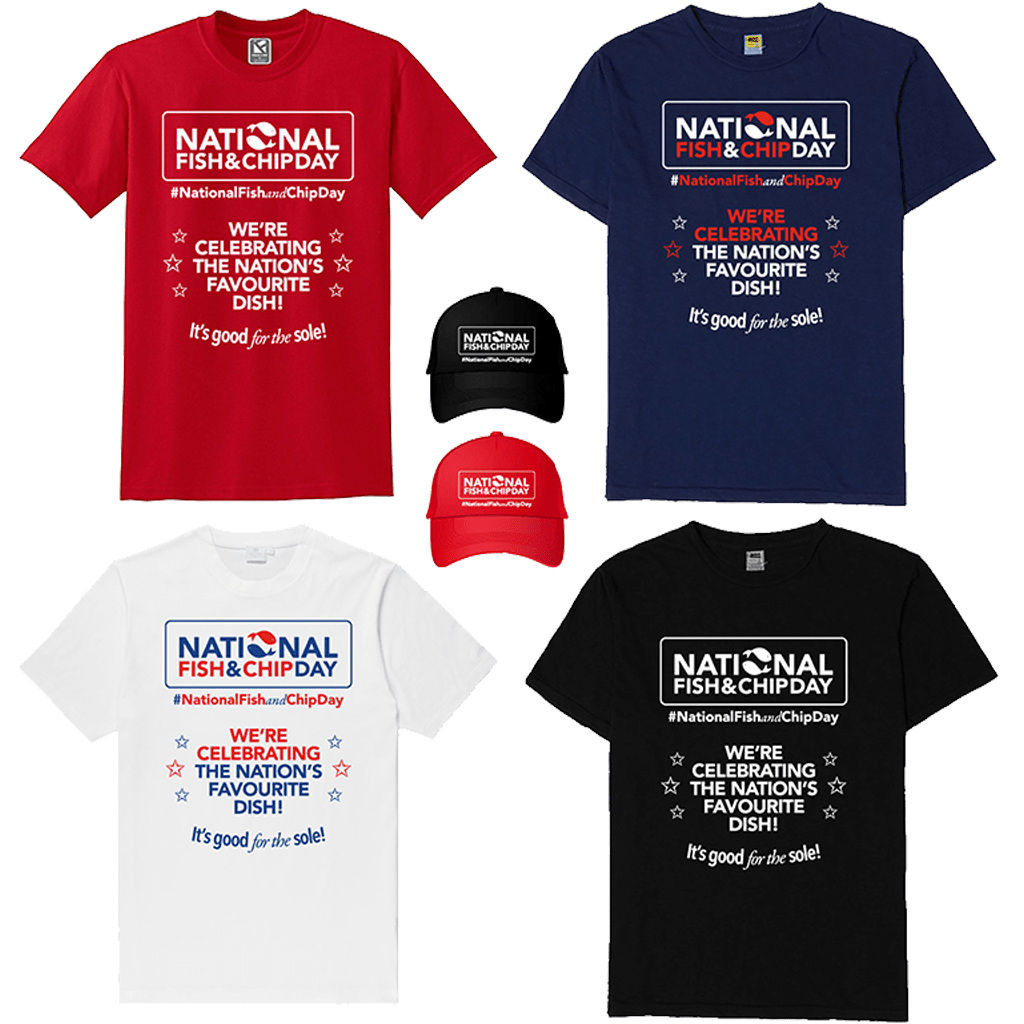 We are delighted to be able to offer National Fish and Chip Day Merchandise this year [image to the left].  T shirts are available in Red, White, Blue and Black (S, M, L, XL and some 2XL and 3XL) along with red, blue and black caps and branded bunting (sold out).  T shirts and caps are available for just £8.95 per item + postage and packing.  For each item sold, we will donate 50p to The Fishermen’s Mission.  Bunting is being sold at cost price at £42 plus p&p.

Shop Now!
Why was National Fish and Chip Day set up?

Back in 2015, one of the finalist businesses of the National Fish & Chip Awards – namely Papa’s Fish & Chips mentioned how a National Awareness Day for fish and chips would be a great addition to the industry calendar. This idea was picked up by a member of the NEODA Board and NEODA decided it was something they could champion, so the first ever National Fish and Chip Day began with a small programme of creative and attention grabbing media activity, undertaken to bring the day to life in the mind of UK consumers and support the industry in driving footfall to local fish and chip businesses – including fish and chip shops, restaurants and foodservice establishments across the UK – to support sales. National Fish and Chip Day is about giving fish and chips the recognition it deserves and helping to secure its position in the eyes of both consumers and the media as the nation’s favourite dish.

The National Edible Oil Distributors’ Association (NEODA) runs National Fish and Chip Day. The National Edible Oil Distributors’ Association is a non-profit organisation established in 1947 and its members include edible oil and fats refiners, processors, distributors and waste oil collectors. It also covers manufacturers and suppliers of non-oil products (including batter mix, sausages, packaging, and potato preservatives) and other industry bodies. NEODA members operate a Guarantee of Confidence scheme whereby all packs of edible oil and fat sold and distributed by members adhere to a strict set of requirements concerning product contents, labelling and pack sizes. Only products that meet the stringent set of criteria can carry a ‘Guarantee of Confidence’ logo. This label assures the quality of products, so consumers can purchase them with complete confidence.

Why does NEODA run National Fish and Chip Day?

National Fish and Chip Day is an awareness day for the consumer. This means it embraces all formats of the dish not just fish and chips from the local chippy. We try to encompass everyone involved in creating this iconic British dish from fish and chip shops, pub chains, restaurants, retailers to the fishermen and farmers who provide the sustainable and natural ingredients needed to create this nutritionally-balanced family favourite. NEODA works closely with other industry organisations and trade bodies such as Seafish, the National Federation of Fish Friers (NFFF), the Frozen At Sea Fillets Association (FASFA) and The Fisherman’s Mission, to achieve the best success on the day.

What do NEODA get out of it?

NEODA members already have excellent relationships within the industry and this day helps to consolidate and further build on these. It’s a feel-good-day that everybody loves working on and lots of NEODA members get fully behind the day by providing monetary support, prizes and the services of their respective staff to travel around the country engaging with fish and chip shops, often spending the day with them helping out in the shop.

Why should I get involved and what’s in it for me?

Supporting National Fish and Chip Day doesn’t have to be time consuming or expensive. By taking part you are joining in an Awareness day that generates huge media coverage in both the build-up to the day and on the day itself. Social media is a cheap but fantastic way to promote your business to both existing customers and also attract new customers to your shop or restaurant. NEODA help you as much as possible to celebrate this awareness day and we have created a core set of promotional support materials (which are downloadable from the NEODA website – www.nationalfishandchipday.org.uk) that you can use to develop your own National Fish and Chip Day campaign.

Do I have to run a competition or give things away?

Absolutely not! This is not the intention and we stress year-on-year that you could do as little as putting up a few balloons in your shop and run a small raffle prize in the build up to the day if you wish. Lots of shops do nothing but still have a successful day because of the PR generated around the day. Lots of shops have reported that National Fish and Chip Day is their most successful trading day of the year, even superseding Good Friday. With a few small ideas and a lot of enthusiasm, you can create a real buzz.

How can I decorate my shop?

Through the National Fish and Chip Day website we sell t-shirts and caps for shop staff and bunting for the shop. These items are all undated so can be used year after year. Our website allows you to download posters for the shop and lots of the industry’s distributors give away promotional posters to shops in the weeks leading up to National Fish and Chip Day. Balloons and unbranded bunting can be purchased cheaply online.

Why is it on a Friday?

Friday is synonymous with fish and chips – historically fish were considered okay to eat on religious fasting days hence ‘fish on Friday’ was born. Friday is also traditionally the day when consumers think of eating fish and chips and is also the day most likely for them to be influenced by social media and wider media awareness/encouragement to do so. The thinking behind National Fish and Chip Day is to try to actively encourage people who either don’t buy, or have stopped buying, fish and chips to re-consider purchasing them again.

Why is National Fish and Chip Day in June when potatoes are often not at their best quality?

It was initially decided that National Fish and Chip Day would take place on the first Friday in June in order to spread out throughout the year the various industry events or campaigns related to fish and chips – including the National Fish & Chip Awards run by Seafish, the annual Chippy Chat Ball and the NFFF Annual Ball.   The first Friday in June also usually falls on school half term holidays in England and Wales, a time when it was considered there would be increased consumer footfall to fish and chip shops. However, given the postponement of this year’s event to September due to the Covid-19 situation, NFCD 2020 was deemed to be hugely successful so consideration is currently being given to future timing of the event.

Why is it a day not a week?

National Fish and Chip Day was inaugurated the year after the Agriculture and Horticulture Development Board (formerly The Potato Council) disbanded their annual Chip Week promotional initiative. Although consideration was given to the event being a week long, this was considered too long and would cause many shops to feel too much pressure in trying to publicise the campaign for a week and keep up the momentum. However, there is nothing wrong with shops creating the buzz all week leading up to the Friday of National Fish and Chip Day. Many shops run offers all week, with the main event happening on the Friday.

How is NF&CD funded and what is this money spent on?

National Fish and Chip Day is funded by NEODA members with additional support provided via the generosity of industry partners such as FASFA. The majority of funding goes towards running a wide and varied PR and media activity campaign to publicise NF&CD, and which has resulted in a year on year increase in resultant media coverage, with over 62 million people reached.

Success stories include National Fish and Chip Day being featured on: BBC’s The One Show; BBC Saturday Kitchen; ITV Loose Women; ITV This Morning; Forces TV; BBC Radio 2; BBC Breakfast News; ITV’s Coronation Street; Talk Radio; Absolute Radio; Radio X; LBC; Magic; 5 Live, Heart FM, Capital and Radio London. Consumer print media coverage includes titles such as The Daily Mail; The Sun, The Daily Star, The Daily Express, The Daily Mirror, City AM, i, Metro, as well as Woman’s Weekly, That’s Life, Take a Break, Country Living amongst many others. This is alongside a strong social media presence for NFCD where the day was trending on Twitter from 8am.

By registering your details on the form below, you will gain access to lots of National Fish and Chip Day downloadable material including:

If the documents do not open automatically when you click on them, please check your desktop or downloads folder. By filling in your information, you are agreeing to give us your details purely to keep you up-to-date with information regarding National Fish and Chip Day.